Chlorine is a chemical used in public sanitation.  It is a common water treatment additive used to keep drinking water supplies and swimming pools free of bacteria and other microbes.  But when not regulated, Chlorine can be dangerous, even deadly. 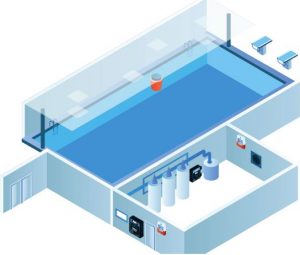 Chlorine gas, also known as bertholite, can pose serious, even deadly, health hazards.  The gas reacts with water in the lungs to form hydrochloric acid, which destroys living tissue.  Chlorine has been used as a weapon during times of war.  Its first documented use was on April 22, 1915 during World War I.  In more recent times, the gas was reportedly used in Middle East conflicts in the 1990s and 2000s.

When safely administered and monitored, Chlorine is an effective decontaminant.  AEB provides solutions from CET (Critical Environment Technologies) for the continuous monitoring of chlorine for indoor swimming pools in recreational facilities or hotels.

Discover How We Can Help